Green to Be Green? Pay-to-Play in LA's HOV Lanes 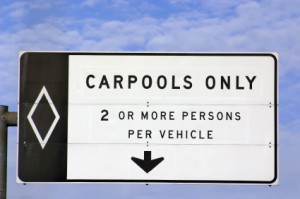 It's not the first express toll lane in the country, but the proposed addition of a toll to Los Angeles' HOV (high occupancy vehicle) lanes could help single-occupancy cars get out of stop-and-go traffic and into the fast lane. But the pass is by no means free.

In a press release to the Green Auto Blog, Xerox announced that one of their companies, Affiliate Computer Services Inc., will begin work to install a new electronic toll system in the HOV lanes of two of LA's busiest highways: Interstate 10 and Interstate 110. The toll systems would allow single-occupancy drivers to use the lanes for a fluctuating fee.

The fluctuation makes sure the flow of traffic is maintained within the express lanes. The goal is a minimum speed of 45 miles per hour at all times of the day. The amount of traffic entering and exiting the lanes is monitored by the same transponders that will be used to charge drivers. When congestion increases in the toll lanes, the rate to enter increases. The theory is that the higher the price, the fewer people will be willing to pay the toll, thus maintaining the flow of traffic. According to David Amoriell, “Essentially, this project will expand the capacity of the interstate without adding expensive new lanes."

Drivers interested in the program will have to apply for a FasTrak prepaid toll account and transponder.  The device will have two settings for the user, one for carpooling and one for a single-occupancy vehicle. If the owner of the car has multiple people in the car, they can set the transponder not to charge them for using the HOV lane. When the driver is solo, they flip the switch to be charged for use of the lanes.

As previously stated, LA is not the first city to try express lanes. Miami had tolls installed on its HOV lanes on I-95 and turned them into express lanes. The tolls average $3.50 to $4 during peak traffic times, and traffic in the lanes stays steady and uncongested.

Some worry that the HOV lanes that were originally intended to reward green driving are now being “sold off” to increase the flow of traffic overall. However, in a city where only 10 percent of the driving population carpools, these lanes have done little to decrease the traffic jams in and around the city. Supporters of the new system claim it will reduce pollution since it will reduce stop-and-go traffic, which is the real detriment to the air quality in LA.