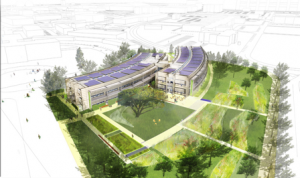 Go figure. The folks setting the gold standard for thinking down to earth are the ones who spend more time with their heads in the clouds. NASA’s newest facility at Moffett Field in California is taking sustainable building to out-of-this-world heights. The building, dubbed “SustainabilityBase,” has been called NASA’s “latest mission on Earth.”

It uses technology that’s already in place and has been used on many space missions to create a more sustainable environment. What types of space age inventions are they using inside the building, you ask? Among the technology is a forward-osmosis system that treats water from the showers and hand sinks and reuses it to flush toilets and urinals. This process is currently being used on the space station.

The technology being used to design and build the newest NASA facility is so advanced that a building this efficient could not have been designed as few as five years ago. The design software can track minuscule changes, such as the energy impact of rotating the structure 10 degrees on the land.

Inside Sustainability Base, the building is almost entirely lit using natural light. Because of the building’s narrow design, the light is filtered into even the most remote desks. Upon entering the base, visitors and employees are greeted with an LCD screen describing how much energy the space is using in real time. The projected numbers are astonishing. It’s believed that Sustainability Base will use 75% less energy and 90% less potable water than it would if it was built using standard building practices.

The building generates much of its own power through a wind turbine and solar panels installed on the property. The materials used to build the base are almost all locally sourced, and much of it is made from recycled material, including oak planks reclaimed from an old NASA wind tunnel.

Of course, everyone who works at Sustainability Base will play an integral role in helping to live up to the building’s name. Whether this means opening a window or closing a shade, the property is designed to be a living, evolving community that incorporates technology, ecology and the human touch.