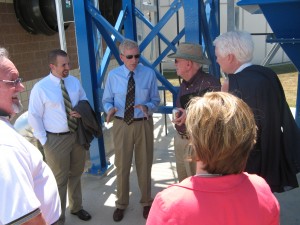 A collaborative process that began in 2002 culminated this summer with the dedication of the Northwest Arkansas Conservation Authority's regional wastewater conveyance system and treatment plant.

NACA is a 10-city authority, the principal goals of which “are to develop and implement cost-effective regional solutions to the challenges of providing environmentally sound wastewater and biosolids infrastructure and watershed management,” according to event materials.

The new $28.8 million facility not only incorporates state-of-the-art technology, including biological processes for nutrient removal in wastewater treatment, but also provides meeting space for regional operations staff, automated controls that reduce operating costs and a 4-plus acre site that allows for future growth and expansion, a critical factor in NACA's continuing mission to serve as a regional environmental steward.

In association with USI Consulting Engineers, Burns & McDonnell was honored to have been selected to provide engineering for a 4 million gallons per day initial capacity treatment plant (with the ability to expand to 6 million gallons), as well as the conveyance system that will eventually connect to city collection systems.

NACA's advanced treatment technology contributes to its role as a national leader in wastewater treatment, including a nutrient removal process that results in some of the lowest effluent phosphorus levels in the U.S. This is of particular concern in northwest Arkansas, given the area's significant agricultural base that results in higher-than-normal levels of phosphorus and other nutrients in the wastewater.

“A three-step activated sludge treatment process with anaerobic, anoxic and aerobic zones removes most of the ammonia, nitrogen and phosphorus,” said Steve Yonker, Burns & McDonnell project manager, in a press release. “To that we added an advanced, two-stage filtration process coupled with chemical addition to achieve very low levels of effluent phosphorus.”

The dedication ceremony, which celebrated the completion of the facility, included remarks from a number of NACA officials, including Executive Director John Sampier and Chairman of the Board Mick Wagner. Jon Moran, liaison to the Governor of Arkansas, appeared on behalf of Gov. Beebe, and Ed Clifford, president and CEO of the Bentonville/Bella Vista Chamber of Commerce provided opening remarks.