Eco-Ride: The Coolest in Transportation Concepts

The concept for the Bombardier Eco4 train solution combined with a Maglev train inspired designer Francisco Lupin to create a train that would be one of the most eco-friendly trains on the market. The train features solar panels on its roof that can track the sun up to 10 degrees in either direction. The solar power, combined with the Maglev train body would make the train the perfect commuter train for rapid transit to and from a city.

Though there are a few plug-in hybrid vehicles on the market today, the newest generation  are expected to hit the market in 2012. They will travel 40 miles on a charge, allowing the estimated 78% of commuters in the country who travel less than 20 miles to work each day to get to and from work without using a drop of gas. 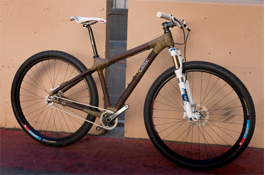 Santa Cruz bike designer Craig Calfee is using bamboo as his bike frame material in his latest line of bikes. The frame is nearly 100% organic, since the tubes for the frame are held together with strips of hemp fiber soaked in epoxy. He claims that the bamboo bikes rival aluminum in their performance, and he is attempting “grow” the entire bike frame in one piece by using bonsai style growing techniques, coaxing the plant to grow in certain directions.

Speaking of bamboo, which must be the hottest new material in sustainable design, Kenneth Cobonpue’s design for a biodegradable car is also made of the rugged plant with rattan added for flexibility. Of course, there’s a steel chassis to support the motor, but the “skin” on the car is designed to last the average length a person owns a car: five years. Of course, if a person chooses to keep the car for longer, the skin can easily be replaced. 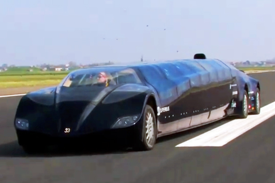 This bus, designed by Wubbo Ockels, looks more like a mash up of a Ferrari race car and a limousine than a bus, which is likely why it can reach speeds of up to 155 mph. So besides the design, what makes this speedy bus so different? It runs entirely on an electric motor. Given the length of the “bus,” it seems best designed for hitting those high speeds on an open road completely devoid of curves, rather than stopping every three minutes to pick up passengers at a city bus stop.