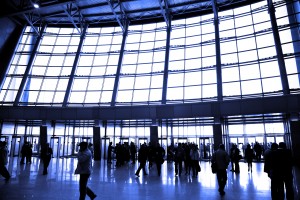 Facility energy costs have always been at the forefront of owners’ and operators’ concerns, but even more so today with reduced revenues and budget cuts. Our nation’s airports and support facilities are no exception. Over the years, design and product engineers have developed many ways to reduce airport energy usage, specifically when it comes to the heating, ventilating and air conditioning (HVAC) system’s air-handling units (AHUs) — the equipment used to condition and circulate air. Here are three examples of how.

VFDs control the volume of air moved throughout a building to match the demand. With the huge swing in occupant loads at airports, VFDs are used extensively on AHUs and cooling-water pumps to reduce energy use. As the occupant load and heat gain decrease within the building envelope, VFDs can reduce the fan and pump motor speed to match the lower load, which reduces energy consumption. In extreme cases, this can reduce energy use by as much as 75 percent from peak operating conditions.

Another energy-saving feature of AHUs is DCV, a method of controlling ventilation based on actual, rather than assumed, occupancy by detecting levels of carbon dioxide (CO2). Building codes require a minimum amount of ventilation (outdsoor air) for building occupants. In most cases, it is delivered at a constant rate. The codes allow for an exception to the constant rate if the CO2 levels produced by the occupants are monitored and controlled to an acceptable level. Instead of introducing a constant rate of outdoor air into the AHU system, the DCV feature allows the rate to be reduced, sometimes dramatically, in response to the CO2 levels in the airstream being returned to the AHU for reconditioning. This saves huge amounts of energy, especially in regions with extreme summer and winter temperatures, because less outdoor air has to be conditioned for the occupied spaces.

The PCO system, which is mounted within the AHU, uses a chemical reaction process with ultraviolet light to neutralize the volatile organic compounds that cause the odor within the jet engine exhaust. Unlike the carbon filter system, which introduces a high air pressure drop because of its thick media, the PCO system has almost no pressure drop associated with it. This lower pressure drop results in a lower fan horse-power requirement to move the conditioned air, and thereby reduces energy costs.

We expect facility improvement projects like these to continue as airports look for ways to further improve energy efficiency and reduce the demand for power. What examples have you seen of airports making strides toward energy efficiency?