MIT's AGNES Suit Simulates How It Feels To Be 70 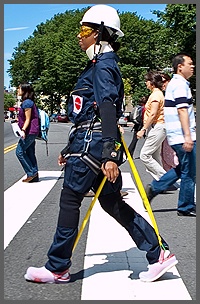 As the aging population increases nationally (and globally), age-related research topics are becoming more important in residential and commercial projects. A new suit created by MIT’s AgeLab, known as AGNES (Age Gain Now Empathy System), allows the wearer to feel what it’s like to be 70 years old.

For example, the suit dims your sight, stiffens your neck and shortens your gait, according to Fast Company Design. “Instead of enhancing physical performance to super-human levels, AGNES is an empathy enhancer,” writes Tim Maly.

A video demonstration of the suit produced by MIT (as shown below) details further limitations created by the suit, including increased fatigue, spinal compression and difficulty with vision and balance. According to the video, the suit was carefully designed by a team of engineers, designers and exercise physiologists.

The AGNES suit is a critical tool to help young engineers, architects and planners understand the true limitations imposed by aging, even through actions as simple as grocery shopping or riding a bus. By gaining a better grasp of aging-related difficulties, industry professionals can create more accessible, intuitive structures and objects that are specially designed for an older population and promote engagement and activity, rather than confinement and isolation.

Consider the rise in universal design-compliant housing, for example. Features such as zero-entry showers, raised toilets and lower kitchen cabinets are becoming more common in residential construction. Universal design homes are typically targeted to aging residents, but a stark reality is that a person of any age may unexpectedly need this functionality as a result of a disability or other health-related condition.

Residential construction is certainly a prime market for aging-related enhancements, but other industries will likely find themselves making key shifts in order to better serve this increasing demographic. Having a tool like AGNES is a critical step forward for those involved in planning and creating these projects, as they gain valuable first-hand knowledge of aging-imposed changes—and can use that experience to make a lasting impact for a population in need.

Image and video via MIT's Agelab