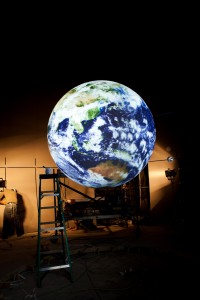 NOAA staff members test the projection on the Science on a Sphere globe.

Big changes are on the way for Union Station’s Science City, and if you’ve been there recently, you’ve probably noticed a new exhibit taking shape.

Science on a Sphere— an exhibit that will bring a world of information to Science City — will debut on March 12 after four months of construction.Science on a Sphere (SOS) is a giant 68-inch globe suspended from the ceiling that uses computers and video projectors to illustrate various elements of Earth science. Visitors can watch environmental changes — thunderstorms, hurricanes, energy use, climate change, etc. — on a global scale to see how these changes affect the Earth.

Researchers at the National Oceanic and Atmospheric Administration (NOAA) developed Science on a Sphere more than 10 years ago to increase public understanding of the environment. There are more than 75 Science on a Sphere exhibits around the world, but the Science City exhibit is the only one within a 350-mile radius of Kansas City.

A team of our own architects and engineers designed the exhibit space, a truncated sphere that mimics the appearance of the Earth. Watch the video below for a brief update from the project architect, Kent Yaros, and construction site manager, Eric Gouldsmith.

Construction includes an aluminum structure of 30 ribs that provides the framework for the outer fiberglass panels and inner metal panels. Inside the room is enough space for 48 visitors to view the interactive 3-D exhibit. Construction crews are putting the finishing touches on the exhibit, and a team of developers from NOAA are configuring the computers and video projectors. 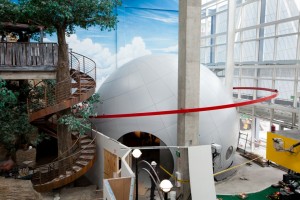 Construction crews are finishing the framework that will house the Science on a Sphere exhibit.

Science City has remained open during construction. Gouldsmith said while the exhibit is under construction, it has almost become a real-life exhibit in itself. It’s not uncommon to see an audience perched on the tree house overlooking the worksite, following the day’s progress as the exhibit comes to life.

Other big changes under way include renovations to the Burns & McDonnell Engineerium, which will be unveiled at the ribbon-cutting for Science on a Sphere in March. Students from Olathe North High School toured Science City last week to look at space for their new exhibit, Unplugged, which won our Battle of the Brains competition last fall. Groundbreaking for Unplugged is scheduled for later this year, with a fall opening planned.

The new exhibits and upgrades are all part of a $1 million-plus grant from the Burns & McDonnell Foundation, awarded to Union Station to help reinvigorate Science City. One of the key aspects of this investment is to bring real science experiences to Science City and its visitors. In the words of our CEO Greg Graves, “We don’t have to make them scientific experts, we just want them to realize that science and math can be cool.”

The countdown to March 12 is on. Are you ready for the new Science City?