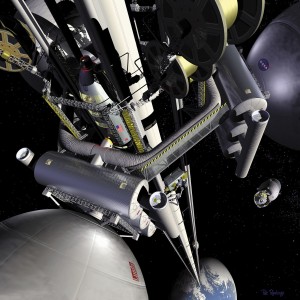 If Japanese construction company Obayashi Corp. has its way, you won’t need to ride a spaceship to outer space — you’ll simply need to step aboard an elevator.

The company recently announced plans to design and build the world’s first space elevator, a mind-boggling feat they hope to accomplish within 40 years.

Once aboard the elevator, the journey to space would take just over a week at a speed of 124.27 miles per hour, according to Red Orbit. The project requires more than 59,000 miles of elevator cable constructed from carbon nanotubes, a material that’s exponentially stronger than steel.

In order to propel the elevator car to space, Obayashi may use magnetic linear motors. Solar power generators may also be used to transmit power to the ground.

So what inspired Obayashi to consider such a challenging undertaking?

“Obayashi representatives told Agence France-Presse that they were inspired by their work on the Tokyo Sky Tree, which will be Japan’s tallest structure at 2,080 feet,” according to Red Orbit.

Logistics, cost and materials aside, it seems only natural that elevators, which propel so many of us to destinations day after day, will eventually be used to reach previously unimagined heights. Consider a space elevator the next frontier of space travel, except for those who suffer from a fear of elevators and/or claustrophobia.

Building a space elevator has long captured the imaginations of engineers, writers and space enthusiasts. Celebrated writer Arthur C. Clarke, author of the 1978 novel The Fountains of Paradise, is widely credited with introducing the concept of a space elevator to a wider audience.

In 2000, NASA published a story on the possibility of using space elevators as a next century mass-transit system, describing the structure as follows:

“A space elevator is essentially a long cable extending from our planet’s surface into space with its center of mass at geostationary Earth orbit, 35,786 kilometers in altitude. Electromagnetic vehicles traveling along the cable could serve as a mass transportation system for moving people, payloads and power between Earth and space.”

We’re anxious to see if the Obayashi Corp. is successful with its space elevator endeavor, or if other companies step up to the proverbial plate. In the meantime, the million-dollar question remains: Would you ride an elevator to space?