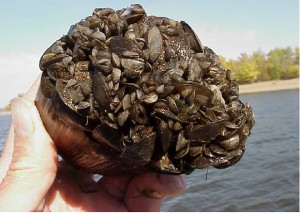 Zebra mussels may sound like a harmless mollusk. But the pesky creatures have quite an appetite for destruction and are capable of altering ecosystems and destroying surface water supply infrastructure.

The small dark or striped mollusks attach to hard surfaces like rocks, boat hulls and water production infrastructure. Once they’ve attached to something, they’re incredibly difficult — not to mention costly — to remove.

Zebra mussels cause so many problems, in fact, that they’re often referred to as aquatic hitchhikers. As more of the mussels attach to surfaces, they clog power plant, industrial and public water intakes. They are projected to cause billions of dollars in damage during the next decade.

“Utilities in the U.S. are already spending about $100 million annually to deal with zebra mussels,” Joe Werner, associate environmental scientist at Burns & McDonnell, said in a release. “Also, despite efforts of state and federal agencies, zebra mussels have spread throughout the Midwest and are continuing to expand their invasion into water supply lakes and rivers.”

Customized plans target water treatment plant intake areas, which offer an ideal environment for the mussels, according to Matt Baker, an environmental engineer in our Water Group.

“They thrive on the plankton carried by the constant flow of the river,” Baker says. “Before you know it, they build up on intake screens and eventually bind intake screens, pipes and pumps altogether.”

Developing and implementing a long-term plan is key to eliminating zebra mussels. Water treatment and city officials are also encouraged to act quickly if they notice any zebra mussel-related issues. Not only do the mollusks cause widespread damage, but female zebra mussels can produce more than a million eggs each spawning season, a breeding rate that contributes to the aggressive evolution of the problem.

“If you have zebra mussels in your lake, they will eventually be in your water intake system, and you need a plan to deal with them,” Baker says. “Every surface water source is at risk for invasion, so a contingency plan is a vital necessity. Even cities without an immediate problem need to take precautions.”

If you’ve noticed zebra mussels in your waterway and need help with a solution, don’t hesitate to contact us for more information.