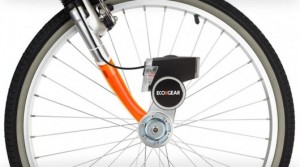 If you love bicycling and multitasking, we’ve found the perfect gadget for you. The EcoXPower is a device that simultaneously powers LED lights and charges smartphones — all thanks to the energy generated by your pedaling.

The EcoXPower includes a headlamp, a red tail light and a lithium-ion rechargeable battery. Simply attach the device to your bike’s front wheel hub. As you pedal, the EcoXPower’s clutch engages with the wheel’s spokes to generate electricity.

A USB cable runs from the wheel-attached component to a water-resistant, touchscreen-friendly case that fits iPhones, Android devices and most major GPS devices.

If you like to hit the open road at night, you’ll likely notice that the EcoXPower’s ability to continuously charge your bike lights represents a noticeable improvement over the average lifespan of a light.

“Typical bike lights have a short life expectancy, most of which are only 10-15 hours or even as low as five if on high brightness,” Greg Fadul, CEO of EcoXGear, said in a release. “Bicyclists either have to routinely buy batteries, remove the light for recharging or replace their lights completely. EcoXPower is self-powered and with the built-in rechargeable battery, extra costs and inconveniences are nonexistent.”

Plus, with the ability to keep your smartphone charged, you can rest assured you’ll never run out of power — even on the lengthiest of rides.

We have a lot of cycling enthusiasts around the Burns & McDonnell offices, and as a result, we pay attention to the latest and greatest cycling gadgets. We’ve noticed other options that let you charge smartphones or power bicycle headlights, but the EcoXPower is the first device on our radar that lets you do both at the same time.

And another thing? We love the idea of creating usable power while we’re biking—there’s something so, well, empowering (no pun intended!) about creating energy as you burn it.

If you pick up an EcoXPower for your bike, we’d love to hear what you think. And if you use any other must-have cycling gadgets, feel free to share.