The Top 5 Feats of Ancient Engineering 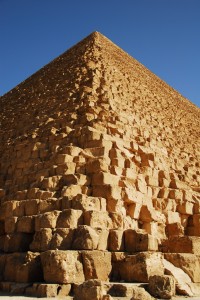 There’s no denying that present-day technology and tools have created some truly amazing engineering and architectural marvels. Yet as we look to the future, it’s important not to lose sight of the past—and that includes recognizing iconic feats of ancient engineering.

Engineering Management created an infographic that chronicles the 5 most amazing examples of ancient engineering. It’s mind-boggling to contemplate the amount of work that went into creating these intricate structures that, at the time, were the very definition of innovative.

Let’s take a tour around the world, shall we?

The Top 5 Most Amazing Examples of Ancient Engineering

Great Pyramid of Giza, built in 2584-2561 BC in Giza Necropolis, Egypt. It took nearly two decades to build this 481-foot tall structure that, for more than 3,800 years, was the tallest structure in the world.

Antikythera Mechanism, built around the 2nd century BC, found near Greece. According to Engineering Management, “the most complex device ever discovered from the ancient world” is “dedicated to astronomical phenomena and operates as a complex mechanical ‘computer’ that tracks the cycles of the solar system.”

Great Wall of China, started in 7th century BC, China. What we know as the Great Wall was actually one of three walls. The wall that still exists today was mostly built during China’s Ming Dynasty (1368-1644). The complete wall spans an incredible length of more than 13,000 miles.

Statue of Zeus at Olympia, built in 432 BC, Greece. Unfortunately, the statue no longer exists; it was damaged in an earthquake in 170 BC and reportedly destroyed in a fire in 475 AD.

Here’s the infographic if you’d like to take a closer look.

What do you think of these five selections? Are there other iconic examples of ancient engineering that you’d add to the list?