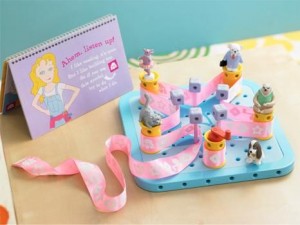 One of our favorite educational initiatives is STEM (science, technology, engineering, and math), and we’re stoked when we see professionals in our field working to help kids get excited about engineering. And that’s why we’re energized by the latest engineering toy that’s hitting shelves and making news: Goldie Blox, an engineering toy designed specifically for girls.

Goldie Blox inventor Debbie Sterling, an engineer from Stanford, was bothered by the low number of females in her college engineering program. She took that problem, and, as engineers are wont to do, figured out a way to solve it — by inventing a toy that teaches girls to love engineering. A year of research showed Sterling that a reading element was key to the overall package, so she created a storybook featuring a problem-solving kid inventor named Goldie to accompany her building toy. After testing her toy-plus-storybook combo prototype on 100 children and a successful Kickstarter campaign, Sterling’s brainchild, Goldie Blox and the Spinning Machine, is in production, available to buy at Goldie Blox’s website, at Amazon, in specialty toy stores, and now at Toys R Us stores nationwide. The toy is not only a winner with kids and parents; it’s starting to rack up awards from the toy industry, too.

Why is it so important to get girls interested in engineering? As Sterling points out in her product’s promotional video (featured below) — and according to the National Science Foundation — 89% of engineers are male. Yet we live in a population that's 50% female. Those numbers certainly don’t match up — and that’s why we believe the engineering field and the world could benefit greatly from a little more balance (not battle) of the sexes.

By targeting young girls, there’s a greater chance at instilling a love of all things STEM that can carry them through their education and careers. Studies show that the foundation for STEM careers is laid early in life, so the availability of engineering toys is important. However, a quick trip down the toy aisles of most department or toy stores reveals that the majority of toys available to kids simply enforce gender stereotypes. That’s why toys like Goldie Blox — designed for young girls ages 5-9 and at an accessible price of $29.99 — are vital.

We’re excited to see where Goldie Blox and her inventions will take the female engineers of tomorrow. Sterling says there will be more from her girl inventor, including the opportunity for girls to build a parade float, tree house, and playground. To keep up with the Goldie Blox company and their engineering toys for girls, you can follow them on Facebook, Twitter, YouTube, and their website.