Cities Aim to Flush Heat Energy Out of Sewers 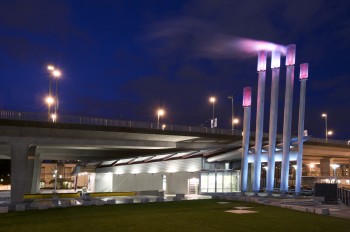 Who could have imagined that shower drains, and dirty dish-and-laundry water would emerge at the forefront of energy efficiency? But it’s happening around the world and in many U.S cities as officials tap into the potential of sewage heat recovery.

Think about it: Wastewater is, for lack of a better term, a wasted resource. One estimate is that Americans flush 350 billion kilowatt-hours of energy into sewers annually — an amount of energy that could instead be used to power 30 million U.S. homes. In order to counteract that waste, more cities are taking measure of sewage heat recovery systems.

Wastewater in a city sewer combines flushed toilet water with millions of gallons of hot water from showers, washing machines and other domestic appliances. This water maintains a fairly constant temperature, typically about 60°F (15.6° C), as it travels through sewers to treatment plants (though this will vary by season and location). The technology involved in capturing that heat is fairly simple: A heat pump transfers the warmth to a clean water system. A closed loop system keeps the clean water and the dirty water from mixing. The warmth from the wastewater helps heat water for use in homes and businesses.

The savings come from the fact that it takes a lot less energy to heat water from 60°F than it does to heat cold water. Additionally, building owners with sewage heat recovery systems can reverse their heat pumps in the summer to dissipate excess building heat and reduce air-conditioning costs. These systems work the same way as geothermal systems but are potentially more cost-effective because they use existing shallow pipes to harvest manmade heat rather than a disruptive deep system to capture the moderate heat of the Earth.

Sewage heat recovery systems are in operation in Tokyo, Oslo and the million-square-foot Beijing South Railway Station. The first North American system, in Vancouver, British Columbia, the False Creek Energy Centre, serves a residential and mixed-use enclave built on a former industrial waterfront site that was renovated for the 2010 Winter Olympics. This community, which aspires to be one of the greenest communities in the world, has 70% of its energy needs met by the sewage heat recovery system.

Another great example of sewage heat recovery in action? Chicago, whose system went online in May 2012 at the city’s water reclamation plant. Heating and cooling energy costs at the plant have been cut by 50%, and with only 2% of the potential energy in the effluent used, there's plenty more savings to be had. It's estimated that the $175,000 system should pay for itself within three years.

Although many local governments are eager to see if sewage heat recovery can work for them, barriers remain to overcome before the resource can be widely developed. Developers say they need more accurate data about the temperatures of the system and how they fluctuate, while administrators are looking at what it means to offer a developer sewer access.

Sewage heat recovery is burgeoning technology and may only be progressing in small steps, but there’s no doubt that there's surprising potential in using dirty water to produce clean energy — and we’re interested to see how this technology continues to evolve.

Image via City of Vancouver