Smart and effective solar heating and cooling policies have the potential to create new American jobs, stimulate the U.S. economy and protect the environment. That’s the conclusion of research conducted by BEAM Engineering on behalf of the Solar Energy Industries Association. The research authors say the U.S. could save an estimated $61 billion annually and create more than 50,000 new jobs by the year 2050 by adopting a proactive program of installing solar-powered heating and cooling systems.

The research report sets out a roadmap to install 100 million new solar systems in the U.S. by 2050, increasing the capacity of solar from the present 9 gigawatts (GW) thermal to 300 GW thermal. With an estimated 44% of U.S. energy consumption attributed to temperature control, this would have the potential to allow the nation to generate nearly 8% of its heating and cooling needs from solar energy, displacing an estimated 226 million tons of carbon emissions each year.

The nation is well-placed to take advantage of solar energy as illustrated by this graphic from the report, which shows the relative power of the sun in different regions of the world. 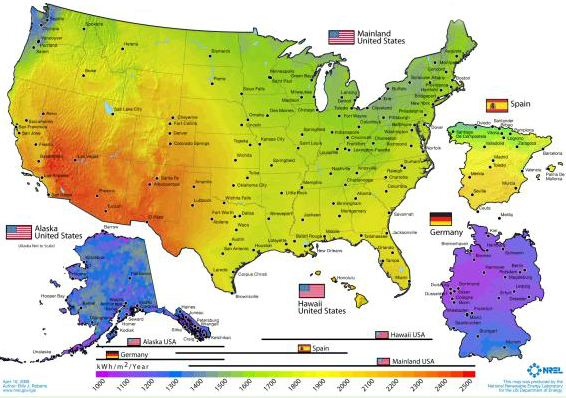 To put the relative good fortune for the U.S. in perspective, Germany, a world leader in solar energy, has solar resources similar to that of Alaska, one of the least sunny states; a situation that should go a long way toward empowering U.S. residents to make decisions about their future energy supply. We’re starting to see some of our cold climates adopt solar tech, similar to what’s happened in Minnesota in recent years, which is exciting. It’s definitely exciting for our team of solar and energy geeks!

The research suggests that if the goals as set out in the policy roadmap are achieved, solar heating and cooling has the potential to generate enormous benefits for government and taxpayers, including:

The report does, however, sound a warning to the industry, regulators and government that failure to implement the recommended policy will result in a different scenario.

As this graphic suggests, a business as usual approach to the situation could result in only a quarter of the projected capacity from solar by 2050.

The report’s authors will be encouraged to see a 15% growth in installed solar from quarter one to quarter two in 2013. You can find full details of the research at Solar Heating & Cooling: Energy for a Secure Future. What’s your view on the future of solar?

Matt Brinkman heads up the Energy Group in our Phoenix office. He specializes in utility-scale and commercial-scale solar projects.

by Matt Brinkman
Matt Brinkman is solar business unit manager and regional energy practice manager in Phoenix for Burns & McDonnell. He leads a multidisciplinary team of engineers and designers specializing in capital and O&M projects at existing power plants and utility-scale solar plants.