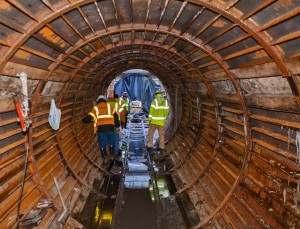 When the City of St. Joseph, Missouri, constructed its sewer system in the 1930s, standard practice was to convey sanitary sewage and stormwater runoff into a single pipe. This leads to overflows during periods of heavy rain or snowmelt and water quality degradation in streams and rivers.

Faced with a decades-old problem that needed to be addressed to meet today’s environmental regulations, the city turned to Burns & McDonnell to implement a separate stormwater runoff system from the Whitehead Creek Basin and reduce combined sewer overflows to the Missouri River.

The Whitehead Creek combined sewer carried stormwater and sewage from the Whitehead Creek Basin to the Missouri River. Most of the time, wastewater in this type of system flows to a sewage treatment plant, where it is treated and discharged to a body of water.

But during heavy rains, the volume in the combined sewer system exceeded the capacity of the system or treatment plant and overflowed directly into the Missouri River. These overflows contained untreated human waste, which degrades water quality and creates environmental concerns.

Building a Solution with a Separation Conduit

The original sewers run beneath industrial and residential areas, crossing buried utilities under an active railroad line and interstate highway. Although preliminary concepts for new separation sewers presented similar challenges, the project team was able to develop designs that reduced risks and impacts to private property and lowered the project cost from more than $18 million to $12.6 million.

Today, the Whitehead Creek Stormwater Separation Conduit diverts a portion of the stormwater runoff in the Whitehead Creek Basin around the combined sewer system to the nearby Missouri River. In addition to reducing overflows by two-thirds and improving overall water quality, the new conveyance system lessens the load to the city’s wastewater treatment plant by an average of 2 million gallons each day.

By rerouting the new separation conduit away from the original alignment and making other design modifications, Burns & McDonnell made it possible for the city to complete the project on time — and nearly 40 percent below the original estimated cost.

by John Mitchell
John Mitchell is process technology director for water industry projects at Burns & McDonnell. He has more than 30 years of experience in water and wastewater treatment, wastewater collection and planning services.