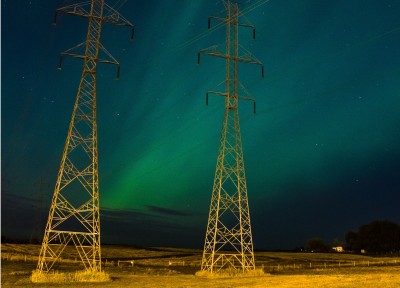 A cloud of solar material and electromagnetic radiation hurtles from the sun towards Earth, disturbing the electric grid and leaving millions without power. It sounds like science fiction. But it actually happened in Quebec, Canada, in March 1989 — and it will happen again.

Protecting the bulk electric system from the impact of these geomagnetic disturbances is a focus of the new North American Electric Reliability Corporation (NERC) standard TPL-007-1 (enforcement date starting July 1, 2017.) Utilities must conduct an in-depth analysis and develop a comprehensive plan to be compliant — and to prepare the grid for solar events.

How Geomagnetic Storms Can Impact the Grid

Geomagnetic (or solar) storms are happening all the time, and most have little impact on Earth or its technologies. But larger storms associated with solar coronal mass ejections (CMEs) are a different story. Here’s how CMEs can affect the electric grid:

In Quebec in 1989, the currents found a weakness in the electrical power grid, plunging the entire province into darkness in less than two minutes. The largest recorded solar storm — known as the Carrington event — occurred in 1859, causing the failure of telegraph systems throughout Europe and North America. Scientists hypothesize that such an event today could devastate the modern world.

To adhere to NERC TPL-007-1, a recent NERC announcement said utilities must “conduct initial and ongoing assessments of the potential impact of a 1-in-100-year benchmark geomagnetic disturbance event” on their equipment and the bulk power system as a whole. The standard also requires corrective action to protect against instability and cascading failures.

This is no small job for utilities. Because GIC is quasi-DC current, utilities must develop and maintain DC-equivalent models of the system to effectively study GIC impact. In many cases, this requires the development of an entirely new model rather than the updating of an existing one.

How We Help Utilities Prepare the Grid

There is some good news about preparing for the impact of solar storms. Scientists at the National Oceanic and Atmospheric Administration (NOAA) constantly monitor space weather — and can give from 18 hours to a few days warning if a potentially catastrophic solar event is coming Earth’s way.

And at Burns & McDonnell, our engineers and scientists are devoting considerable effort to understanding how utilities can prepare the grid for a geomagnetic event as effectively as possible:

A potentially damaging geomagnetic event will happen — we just don’t know when. Where is your utility in the preparation process? We’d love to hear about your activity, as we’re working to gather and distribute information about the topic to increase the industry knowledge base.