CBRS Auction Results Are in; Did Utilities Cash in to Build Private LTE?


The Federal Communications Commission (FCC) has adopted new rules for shared use of the 3550-to-3700-megahertz (MHz) band, known as the Citizens Broadband Radio Service (CBRS). Also known as Band 48, CBRS occupies 150 MHz of shared spectrum in the 3.5 gigahertz (GHz) C-band.

This band was historically reserved for the U.S. military and fixed satellite service. Additionally, some utilities also deployed WiMax systems within the 3550-to-3650 MHz (3.65 GHz) segment of the CBRS band. As technology continues to evolve, the FCC’s action shows they will advance spectrum offerings with it to meet market demands.

As part of this ruling, the FCC created an access and authorization mechanism — Spectrum Access System, or SAS — to coordinate shared band use so licensed users protect and accept interference from incumbent users, while also receiving protection from general access unlicensed users.

The priority access licensed tier of CBRS consists of licenses that are acquired on a county-by-county basis through an FCC Auction mechanism. This auction ran for 76 rounds from July 23 to Aug. 21, 2020, with detailed results released from the FCC on Sept. 2.

Eleven utilities entered the auction and 10 submitted successful bids totaling over $174 million and acquired 371 licenses for CBRS spectrum in 150 counties.

Each PAL consists of a 10 MHz channel within the 3550-3650 MHz band. PALs are 10-year renewable licenses. Up to seven PALs may be licensed in any given county (70 MHz), with a four-PAL channel cap (40 MHz) for any single licensee in that county. Like most licensed spectrum, PALs must meet a substantial service performance requirement by the end of the initial license term.

This was the first time that utilities have really had to compete for broadband spectrum against major carriers looking to enhance their 5G networks. A single license channel size, although small by 5G standards, was generally significant for utilities and their present and future applications.

On a basis of price per MHz, per population ($ per MHz-pop), the costs in many markets exceeded expectations. The auction resulted in total gross proceeds of $4.585 billion at a nationwide average price per MHz-pop of $0.217. 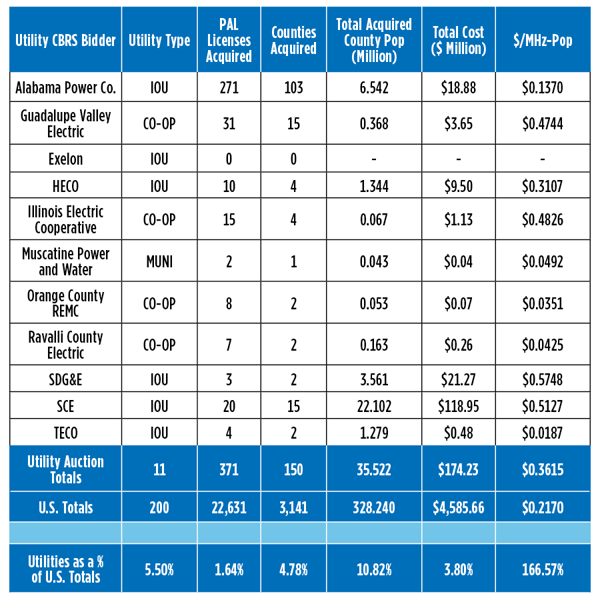 Utilities that acquired spectrum generally got value for their investments, acquiring counties comprising over 10% of the U.S. population, but only paying for 3.8% of the gross auction proceeds. The weighted average cost per MHz-pop, however, comes out quite a bit higher than the overall country average at $0.3615/MHz-pop. This is likely driven by the urban and expansive nature of the utilities bidding.

Here are the major takeaways:

Spectrum Decision Isn’t the Only Decision

The broadband wireless networks that utilities are considering are transformative for their business. But the enabling spectrum question has never been an easy one. With only 10 utilities acquiring licenses and cashing in on this opportunity, further examination is needed.

CBRS was supposed to create a historic opportunity for utilities to acquire landmark spectrum that was not previously made available for them. In working groups, with trade bodies and from government, utilities have been demanding spectrum. Why did only 10 utilities step up to the plate?

The low participation wasn’t for a lack of spectrum need or desire to deploy new broadband wireless technologies. A majority of utility CIOs today are talking about broadband wireless solutions like PLTE being the technology that enables their 10-year vision. A dozen utilities that did not participate in the auction are still pursuing PLTE but want to use a different spectrum strategy.

It also wasn’t for lack of money or the cost of licenses in many markets. Although revenues are down for utilities in the short term because of COVID-19, there is still long-term confidence in the energy sector. This level of capital investment in broadband spectrum is clearly within their financial capabilities and ranged in cost proportional to the size of the utility. Well-capitalized utilities have the ability to make that investment, yet most didn’t.

There are divergent points of view within the industry about what course is the most prudent in this new era of technology-enabled opportunity. A subset of that discussion is: What is a fair price for utilities to pay for spectrum? Some industry advocates suggest that although utilities are for-profit entities, the government should grant them spectrum equivalent to government agencies, in that utilities provide infrastructure critical to national security. The FCC, in stark contrast, has made it clear that spectrum will be auctioned and governed by a free market. No spectrum will be “assigned” to a specific industry going forward.

There is no question that utilities are critical — not only to national security, but to a healthy economy. Therefore, they are oriented toward scenarios that give them the greatest control of their assets. In the spectrum world, that means unfettered access to the full channel. Coordinating with other entities for shared spectrum isn’t a viable option for some critical infrastructure owners.

Each utility must reexamine what is fundamentally correct to meet its own needs and land on the solution and enabling spectrum that aligns with its use cases, applications, device type and density, service territory scale and geography, and infrastructure.

Some utilities are pursuing sub-1-GHz spectrum options to maximize coverage and align capacity with their core utility applications. Others are pursing midband spectrum for capacity and spectrum cost benefit in their markets. As regulated entities with obligations to provide reliable service at the lowest reasonable cost, the utilities’ decision points will ultimately come down to what represents the lowest total cost of ownership to support critical communications needs.

When building a financial model to support these foundational networks, spectrum rarely requires the biggest cash flow. Infrastructure does. The tradeoff between spectrum coverage versus cost relative to infrastructure grows dramatically with the size of the service territory. If all else is equivalent, such as applications and required channel size, most utilities are proceeding with the option that provides better coverage for a lower infrastructure cost. Less infrastructure also results in a less complex system and lower operations and maintenance costs.

Utilities ultimately are focusing on a hybrid spectrum approach that enables the financial model to demonstrate value and prudence to their customers and regulators. Utilities that missed out on a PAL (or intentionally avoided it) still have general-access CBRS spectrum options to consider. CBRS spectrum, when combined with the advantageous infrastructure economics of a foundational sub-1-GHz spectrum deployment, will be a complement to add capacity to a built-out secure private LTE network.

Private LTE networks are emerging as viable options for utilities.

by Jeffrey Casey
Jeff Casey, MIET, is a networks, integration and automation strategy and consulting manager at Burns & McDonnell. With more than a decade of experience in the transmission and distribution industry, Casey’s diverse background in substation networks, IEC 61850, distribution substation automation, program management and cybersecurity standards has helped him deliver energy projects for clients worldwide. He leads the development and growth of new and emerging market opportunities within the firm’s Networks, Integration & Automation Group, currently focusing on the private LTE broadband and the fiber-to-the-premise rural broadband business lines.