Discovering Opportunities for Decarbonization Via the Hydrogen Rainbow


As a focus on environmental, social and governance (ESG) scores continues to grow, many industries are seeking increased opportunity for sustainable and low carbon initiatives. One major player that can help reduce carbon footprint comes in the form of hydrogen — particularly, when it is produced through methods that either capture or do not emit carbon dioxide.

Despite most hydrogen production utilizing steam methane reforming (SMR) at this time, hydrogen can be created many ways, using a variety of inputs or sources, which each have a different impact on the environment. Production methods can include gasification plants, SMR, pyrolysis and electrolysis. The inputs that go into production vary from oil, coal or biomass to natural gas or methane, and finally, water with renewable power or nuclear input.
This can be more easily shown and understood by analyzing the “hydrogen rainbow,” which is divided into color categories based on energy sources, production processes and carbon dioxide emissions: 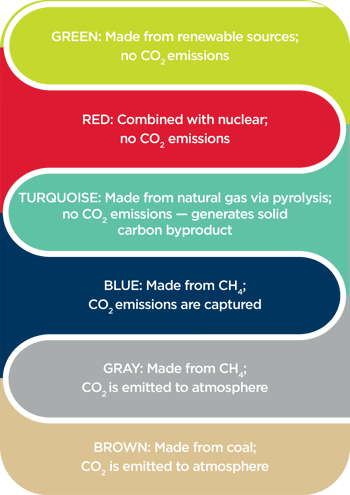 Figure 1: Industry is adopting a "color rainbow" to easily distinguish the sources of hydrogen the its renewable credentials.

While the colors of the hydrogen rainbow aren’t officially standardized across the industry yet, sustainable and low-carbon energy initiatives are in development and being implemented across the globe, each targeting carbon emission reductions. The viability of hydrogen as a high-energy-capacity storage medium with no-carbon potential makes investment in the hydrogen rainbow attractive in this context. Trends indicate continued growth in hydrogen demand as new markets develop and existing user demand expands, requiring investment in a sustainable transition to a reduced-carbon future.

As trends toward decarbonization and renewable generation gain steam, interest in hydrogen has reemerged as a potentially key technology in the evolution of the power industry.

by Meaghan McCaffrey
Meaghan McCaffrey is the Managing Director of Renewables at Burns & McDonnell. In this role, she focuses on identifying and proposing innovative engineer-procure-construct (EPC) renewable project solutions and fosters long-term relationships in the chemicals, oil and gas industry.