Honoring Veterans of WWII: Women of the 6888th


The 6888th Central Postal Directory Battalion — known as the Six Triple Eight — was the only all-Black Women Army Corps (WAC) unit deployed to Europe during World War II. On Nov. 30, 2018, five of the surviving veterans from the unit traveled to the Buffalo Soldier Commemorative Area at Fort Leavenworth, Kansas, for the dedication of a monument honoring their service.

The 6888th Central Postal Directory Battalion was active from 1945-1946. The battalion was formed to sort and distribute mail for military and civilian personnel because the Army realized the impact of connection on service members. It was noticed morale was lower when individuals did not receive mail and contact from loved ones.

Specifically, the unit was charged with clearing several years of backlogged mail in the European Theater during the war. The 6888th was stationed in Birmingham, England; Rouen, France; and Paris, France. While in England, the Army gave the unit six months to clear the mail backlog, which filled large warehouses from floor to ceiling. The women sorted nearly 18 million parcels of mail in three months. Millions of additional pieces of mail were sorted by the unit during its time in France.

The women of the 6888th illuminated conversations between loved ones that had gone dark during a dark time. They helped deliver mail and, with that, hope. The unit’s contribution to the war is a reminder of the importance of diversity. The battalion’s legacy demonstrates that having the opportunity to serve in the military provides a platform for all to showcase innovative thinking and creative problem solving.

The completion of the unit’s monument was historic. It was the final part of a 30-year commitment made by retired U.S. Navy Cmdr. Carlton Philpot to celebrate the history of America’s Black veterans. 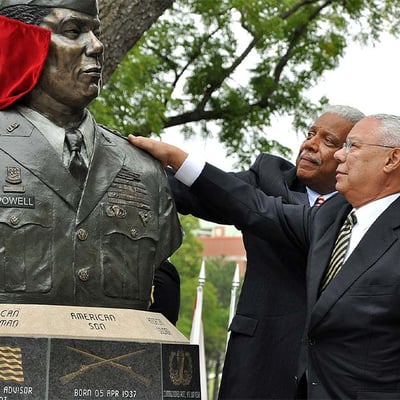 The vision for creating statues to celebrate Black veterans began decades ago when Powell expressed a desire to see a monument honoring the Buffalo Soldiers while he was stationed at Fort Leavenworth in the early 1980s. The Buffalo Soldiers were formed after the Civil War by an Act of Congress in July 1866, authorizing the formation of six all-Black regiments — two cavalries and four infantries. These men and one known woman played a vital role in the Western Expansion. Fort Leavenworth is where the 10th Calvary, the most prominent of the six regiments, originated.

Philpot volunteered to help make Powell’s wish to create a Buffalo Soldier Monument a reality. Philpot and other volunteers designed the monument and raised funds to bring the general’s idea to life. The result was a $1.3 million bronze horse and rider statue. At the Buffalo Soldier Monument dedication on July 1992, Powell gave a keynote address to a crowd of approximately 20,000.

While working on the Buffalo Soldier Monument, Philpot became aware of the Women of the 6888th and promised one of its surviving members that he would build a monument honoring their service. Despite the battalion’s achievements during the war, Philpot says, “the Army did not give these hard-working, determined women a unit commendation, which they deserved.”

U.S. Sen. Jerry Moran of Kansas, Philpot and others secured an Army Meritorious Unit Commendation Award for the 6888th. Additionally, Moran, a Republican, and U.S. Rep. Gwen Moore of Wisconsin, a Democrat, also have introduced bills to award the unit a Congressional Gold Medal.

“Everyone should know that Black men and women contributed to the defense of this country and to the privileges and rights we all enjoy today,” Philpot says. He hopes the posthumous recognitions will raise the world’s awareness of what the unit’s 855 women accomplished.

The Women of the 6888th Central Postal Directory Battalion Monument is the last statue Philpot worked to have placed at Fort Leavenworth. With the help of Burns & McDonnell, he kept his promise to honor the women veterans by arranging an all-expenses paid trip for some of the surviving members of the battalion to attend the monument dedication.

“No medals or recognition could bring more joy than seeing the tears on the faces of the 6888th veterans as they searched for their names on their monument,” Philpot says.