Utilities are working to keep pace with ever-changing customer requirements and technology advancements for improving grid performance by strategically balancing the limits of private network capacity.

Private utility networks often exceed leased service capacity where the utility owns fiber; however, microwave networks are still very common and reliable, despite capacity constraints when faced with increasing data demands on the network. With cloud applications driving a lot of the new demand, there are boundless opportunities to use innovative technologies to solve these challenges. A plan for strategic capacity usage can help preserve and extend the life of existing equipment and defer fiber projects by making more efficient use of existing microwave capacity.

Software-defined networking in wide-area networks (SD-WAN) offers utilities the capability to better manage and efficiently use existing capacity and maximize link utilization. Routing protocols choose a best path regardless of congestion, meaning all data is often pushed through a few links back to a central point. One option is to manually weight and manipulate routes to distribute traffic, a less than ideal solution. A better solution is to push cloud data off private infrastructure nearer to the application when using SD-WAN and local internet access points throughout the network.

The below diagram illustrates the concept of how aggregate traffic flows add up and compound in case of a ring failure. With local takeout points, even with a path failure, the aggregate flows do not add up nearly as much. 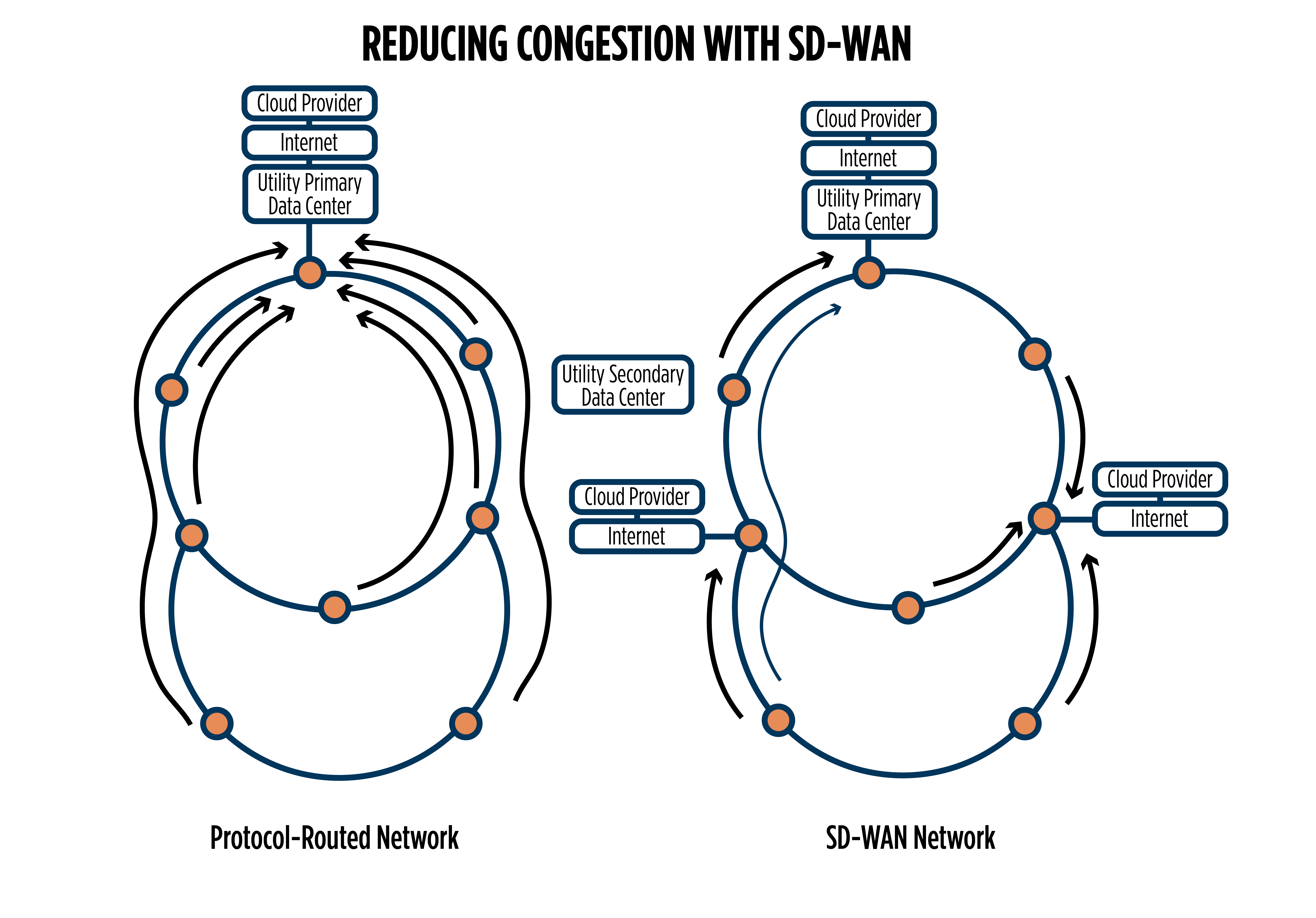 Quality of service management and application performance can also be considered to maintain expected performance levels and dynamically shift traffic loads. The dynamic routing, multiple egress points from the network and application health monitoring would add significant complexity to a traditional, routed network. With SD-WAN, these challenges can be solved.

Software-defined networking (SDN) changes how networks learn destinations and forward traffic. Protocol-based networks are based on rigid standards that are predictable and interoperable (e.g. BGP, OSPF, EIGRP), yet are slow to evolve. To address issues with scaling traditional network designs, hyperscale cloud data centers worked to develop SDN. In its simplest form, SDN gives access to an application programming interface to control the network — that is, a standardized interface to control a device — but the rules are no longer tied to protocols. This allows monitoring agents to feed performance information back to the network, secure traffic and allow a controller to update traffic paths in real-time to optimize the network.

One way to think about protocol-based networks is through a car analogy. Today, driving decisions are made by individual drivers — or routers, in this case — using the shortest route to a destination. Turning at an intersection is likely a decision based on the shortest distance for one car. When congestion happens, no one has a holistic view of a problem and many drivers try to use the same side streets, because there is no coordination. SDN/SD-WAN is comparable to everyone using a navigation app that plans every route for every driver and spreads out traffic optimally, so congestion is avoided from the beginning.

SD-WAN is SDN applied to solve a different problem — to simplify the complexities of using various transport networks, including networks outside of your control. SD-WAN creates an overlay network between sites and abstracts the complexities of the underlying transport networks. It also provides the encryption and security utilities require. This concept was popularized by enterprises connecting branch offices to data center services, which greatly simplified mixing low-cost WAN connections and high-cost multiprotocol label switching (MPLS) connections.

SD-WAN utilizes a centralized control function to securely and intelligently direct traffic across the WAN(s) without complex routing and virtual private network (VPN) setup, while also monitoring application performance and adjusting when application performance is less than optimal. Cloud-bound traffic is sent directly to the internet at the branch instead of carrying it all the way back to a data center internet connection, while data center traffic is secured and routed back, similar to how it was with a VPN.

SD-WAN allows simplified deployment of multiple, low-cost internet connections. It can dynamically reroute traffic in case of failures so possible long repair times for low-cost cable modem connections are offset by having multiple connections throughout the system. With the end goal of reducing traffic load on private infrastructure, these distributed takeout points get cloud data out to the internet quickly and off the private backbone by strategically locating low-cost internet connections at line centers or other utility offices.

Market forces are driving a migration to packet networks, and software-defined networks will be next. Utilities can make use of various techniques to help lead utility private networks into the future.

by Dan Bayouth
Dan Bayouth, PE, is business line manager for networks at Burns & McDonnell. He specializes in telecommunications and network engineering for critical infrastructure. His experience includes MPLS, private LTE, substation IEC 61850, DWDM, and SONET network design construction, integration, and operations. He has served as project manager and senior architect for the design and construction of multiple utilitywide network installations.