The Trouble with Our Bridges 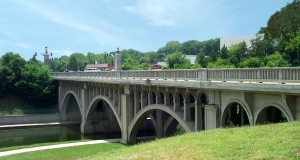 Many of us cross bridges on our daily commutes to the office or travels within the communities in which we live. But you may not realize that the condition of these bridges is less than stellar. According to data from Transportation America, more than one in 10 U.S. bridges is in need of serious repair. Bridges typically were designed with an expected lifespan of 50 years. Many are now past their prime in terms of their useful life. The average age of a U.S. bridge is 42 years, and the average age of a structurally deficient bridge is 63 years.

Our corporate headquarters are in Missouri, so we took a look at that state’s data for this post. What did we find? Missouri is among the 10 states with the most dangerous bridges in the country. Part of the problem? The state’s bridges were never intended to last as long as they have.

The good news is that Missouri has made significant strides in improving some of its most dangerous bridges. In fact, it has made more progress than any other state. Through the Safe & Sound Bridge Improvement Program, the Missouri Department of Transportation has repaired more than 800 bridges in the past three and a half years. This $685 million project was completed 14 months ahead of schedule.

But while many of the state’s bridges are in better shape than they used to be, there’s still significant work that needs to be done. According to the Federal Highway Administration, 14 percent of Missouri’s bridges are structurally deficient, meaning that at least one major component has serious deterioration and is in need of repair or replacement.

Maintaining and repairing older bridges is expensive, but many states, like Missouri, lack sufficient funding to make the necessary repairs. Unfortunately, that means the situation isn’t likely to improve any time soon. For most states, gasoline taxes provide a significant source of funding for bridge construction and repair, so it should come as no surprise that many states with most structurally deficient bridges have the lowest gas taxes. Other sources of funding, such as sales tax, are also used to fund bridge repairs. An initiative petition has recently been filed with the Missouri Secretary of State that will help transform Missouri’s economy by making critical improvements to Missouri’s transportation infrastructure.

On a national scale, the House Freight Panel recently published its report on 21st Century Freight Transportation, which evaluated how goods move across the United States. U.S. bridges were graded at an unimpressive C — only slightly higher than our nation’s roads, which received a D. Without question, maintenance and upgrading of our infrastructure is going to be critical, both nationally and regionally, moving forward.

What do you think? If you’re a Missourian, would you be willing to pay more in taxes if it meant improving the quality of our bridges? Does the condition of our nation’s roads and bridges in general ever cause you to worry about your safety?

You can read the full report here: Improving the Nation’s Freight Transportation System

Other resources on this topic:

NY Daily News: Danger Ahead: America’s bridges and roads crumbling, and the Highway Trust Fund is set to go broke in 2014.

Kevin Eisenbeis is the director of bridges in Burns & McDonnell’s Transportation Group. He is licensed professional engineer and a structural engineer with 33 years of experience in bridge design.