Surveying Project Sites for American Burying Beetles: What You Need to Know 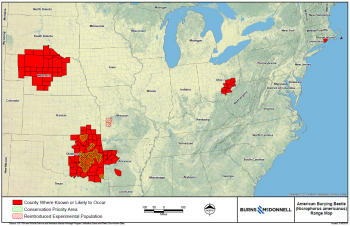 The American burying beetle (Nicrophorus americanus) might not be the most glamorous insect — it depends on carrion (dead flesh) from dead birds and small mammals for food and reproduction — but it plays a crucial role in our nation’s ecosystem. As the beetles decompose old carcasses, they return valuable nutrients to the soil, and because of this important biological role they also serve as an indicator species to help identify irregularities in our environment. By studying the presence, absence or abundance of the American burying beetle, ecologists can use the indicator species to help gauge the overall health of a particular ecosystem.

And although the species was listed as endangered (54 FR 29652) in 1989, there’s currently a petition under review by the U.S. Fish and Wildlife Service (USFWS) to delist the American burying beetle, citing uncertainty on population trends, distribution and threats impacting the species. With the future of the species’ endangered status uncertain, you may be wondering how to handle ongoing conservation efforts in the interim.

Many projects throughout the Great Plains have required presence/absence trapping surveys for the American burying beetle as a way of determining if the species is present at a specific project site. If the beetles are found on a particular site, they are live-trapped using carrion — usually a dead laboratory rat that is well aged and emitting a pungent odor. These surveys can only occur during certain times of the year, which can often impact project schedules.

Within the Great Plains states, the American burying beetle is typically active from mid-May to mid-September but the USFWS’ survey rules vary based on region. For the southern populations in Arkansas, Kansas, Oklahoma and Texas, surveys completed prior to July 28 are only valid for the active period of a given year; surveys completed after July 28 are valid until the start of the following year’s new active period, typically May of the year following the late season survey.

For the northern populations in Nebraska and South Dakota, there are two distinct survey windows — the first during the month of June and the second in August. For both northern and southern populations, trapping surveys must be conducted over the course of five nights when the average temperature at midnight is 60 degrees Fahrenheit or greater.

Unsure if your project is affected? We have a team of threatened and endangered species specialists who can assess a project’s potential impact on American burying beetles and offer a variety of survey and mitigation options. If you’d like to learn more, comment below or shoot me an email. I’d be happy to help.

Brian Roh is a threatened and endangered species specialist, wetland scientist and aquatic ecologist at Burns & McDonnell. He has a wide range of experience with wildlife species identification and habitat assessments.

by Brian Roh
Brian Roh is a threatened and endangered species specialist, wetland scientist and aquatic ecologist at Burns & McDonnell. He has a wide range of experience in wildlife species identification and habitat assessments.