Analysis of the rusty patched bumblebee’s abundance, distribution and resiliency by the USFWS indicates that the species population has been significantly declining since the late 1990s, and is projected to continue declining over the next several decades.

The rusty patched bumblebee is one of 47 varieties of bumblebees found in North America, and like many other bees, it is a highly social creature that thrives in colonies consisting of a queen and worker bees. During the active season (early spring to fall,) colonies can be found underground in nest cavities and abandoned burrows during the active season. The rusty patched bumblebee can be found in a variety of habitats, but prefers woodlands and grasslands with abundant and diverse flowering plants capable of providing a sufficient food supply of nectar and pollen. 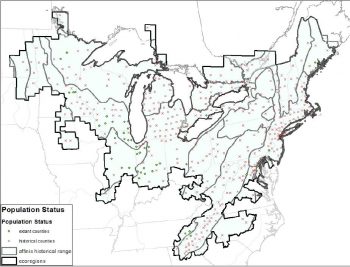 Although the rusty patched bumblebee was once abundantly documented in 31 states and providences across much of the eastern and Midwestern U.S. and Canada, since 2000 the species has experienced dramatic declines with current records documenting populations in as few as 14 states/providences —totally an 87-percent loss in the last two decades. The precise causes for these declines remain unclear, but research is ongoing.

The ‘endangered’ listing indicates that the USFWS has reviewed the status of the rusty patched bumblebee and determined that the species is in danger of becoming extinct. Taking effect on Feb. 10, 2017, the rule will prohibit killing or injuring of the species, including any harm caused as a result of habitat modification, unless otherwise permitted. In some cases, USFWS consultation may be required before completing an activity that could impact rusty patched bumblebees.

Burns & McDonnell has a team of specialists in threatened and endangered species — professionals with many years of experience conducting habitat assessments, presence/absence surveys and consultations. If you’d like to learn more, comment below.

by Josiah Maine
Josiah Maine is an assistant environmental scientist who specializes in Endangered Species Act surveys, compliance and consultation.