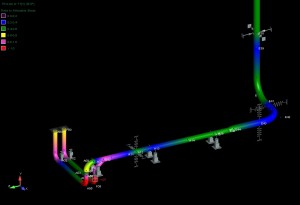 Every piping system used to convey products needs to have reliable supports to ensure those pipes do not get overly stressed or flexed as a result of occasional or sustained loads.

The design of a piping system begins with an understanding of industry standards and regulations. Non-boiler external (NBE) high energy piping (HEP) systems must comply with standards set out in the jurisdiction of the American Society of Mechanical Engineers (ASME) B31.1 Power Piping Code. This regulation sets the design requirements for these piping systems, covering the effects of pressure, temperature, occasional loads, cyclic loads, and dead loads, among others. Under this code, each design is tested for sustained, occasional and displacement loads that may affect the piping system as a result of thermal expansion or other cyclic loads, such as equipment expansion.

Commercial software products are used to ensure thorough analyses of piping systems. In order for a system model to be as effective as possible, piping designers, stress engineers and structural engineers collaborate and endeavor to ensure that a precise design basis is established that incorporates realistic operating scenarios. Several types of data are input into these system models to ensure their accuracy, including material properties, stress intensification factors, thicknesses, tolerances, insulation, and design pressures and temperatures to name a few.

Before a maintenance program is implemented as a long-term life enhancement measure, other steps should be taken to determine the current status of the piping system. For HEP systems, the walk-down should initially be carried out in the cold position at the first available outage, and then in the hot position. Original as-built isometrics of the system should be compared to the as-found piping system on the unit and, depending on the temperature, material and hours of operation, the piping line may show differences in length and slope.

The Consequences of Poorly Maintained Systems

Poorly maintained pipe supports can lead to over-stressing of the piping system and overloading of the equipment nozzles. When stresses in the pipe system increase, the probability of stress cracks forming in the components also increases. The development of these cracks depends on the number of cycles and the amount of stress the pipe system experiences. The highest stress locations in a pipeline should be monitored to ensure the supports function properly. If supports show signs of malfunction, those areas should be considered for non-destructive examination once the damaged supports are repaired or replaced. All HEP systems should be inspected and evaluated under a fitness for service approach to evaluate their suitability for operation.

If you’re interested in finding out more about maintaining a high energy piping system, my colleagues Dan Vail, John Leach and I co-authored an article on this topic, The Importance of High Energy Piping Support Maintenance to Enhance System Useful Life in Energy Tech’s March 2014 issue. Maintaining a HEP system is a complex issue. If you have questions or insights based on your experiences, we’d love to hear from you.

Sam Huff, PE, is a senior mechanical engineer in Burns & McDonnell’s St. Louis office. He has spent the majority of his career working with utility power plants and specializes in thermal stress analysis and piping design.