Refiners have experienced an influx of hydrotreated triglyceride facilities coming online, and more are expected to become operational in the next couple of years. The ability to convert triglycerides and fatty acids to renewable diesel and renewable jet fuels through a hydrodeoxygenation process similar to hydrotreating has been widely recognized and accepted as a method to reduce the carbon intensity of transportation fuels and reduce greenhouse gas emissions. However, the main limitation to producing hydrotreated triglyceride product is sustainably sourcing the necessary feedstock quantities.

With growing concerns about feedstock limitations as demand for fats, oils and greases (FOGs), there has been increased focus on technology to commercialize production of renewable products from more sustainable feedstock sources, such as nonfood biomass and municipal solid waste (MSW). Gasification — an emerging pathway for the production of renewable transportation fuels, renewable natural gas and renewable specialty chemicals — is based on established technologies. The design and construction of commercial-scale gasification facilities is expected to begin in the next couple of years and is anticipated to usher in a subsequent wave of renewable projects.

Gasification is an endothermic thermal reaction process, occurring at elevated temperatures in the presence of air, oxygen and/or steam without complete combustion, to produce a raw syngas product from a variety of biomass feedstocks. Lignocellulosic material, including woody biomasses such as forestry residues, agricultural residues, energy crops, glycerin and byproducts from the pulp-and-paper industry, has been demonstrated as a feedstock for the gasification pathway. Organic waste such as MSW is also proving to be a suitable feedstock.

The pretreated feedstock is transferred to the gasifier and converted to raw syngas in the presence of air, oxygen and/or steam. When air is used as the oxidizing agent, gasifiers typically produce a syngas containing relatively high concentrations of nitrogen with a low heating value, whereas oxygen and/or steam produces a syngas containing a relatively high concentration of hydrogen and carbon monoxide.

The raw syngas consists of mostly hydrogen, carbon monoxide, methane and char. Depending on the types of feedstocks and the operating conditions of the gasifier, the raw syngas may also contain impurities such as ashes, tars, and sulfur and chloride compounds. These impurities could cause corrosion or erosion and could lead to catalyst poisoning in the downstream equipment.

The raw syngas is cleaned up to remove impurities and conditioned to achieve the desired composition through a water gas shift reaction.

Depending on the desired renewable product, methane in the syngas needs to be reformed to carbon monoxide and hydrogen in an additional steam-methane reforming reaction.

A simplified block flow diagram of the gasification process is seen in Figure 1.

The carbon monoxide and hydrogen in the conditioned syngas are used as the building blocks for a variety of commercial-grade products:

Hydrogen — The syngas conditioning and cleanup steps could be designed to increase the hydrogen content of the gas by utilizing the water gas shift reaction. The hydrogen-rich gas stream could be further processed in a conventional pressure swing adsorption unit, which separates the gas molecules by selectively adsorbing impurities onto a molecular sieve under pressure, to recover a commercial grade hydrogen.

Methanol — Methanol could be formed from the syngas, via a methanol synthesis reaction, in the presence of a copper catalyst. The reaction is exothermic and very selective.

Fischer-Tropsch liquids — The syngas could be converted into alkanes, alkenes and oxygenates using a Fischer-Tropsch process. The conversion is very exothermic and nonselective, producing a broad range of low-quality fuel products (i.e., diesel, jet and gasoline) that must be hydrotreated and hydrocracked to be used as “drop-in” transportation fuels.

Mixed alcohols — The syngas could be converted to a mixture of alcohols such as methanol, ethanol, propanol, butanol and some heavier alcohols using a high alcohol synthesis reaction in the presence of a catalyst. These alcohols, specifically methanol, are used as commodity chemicals in the transportation fuels and petrochemical industries.

A simplified block flow diagram of potential gasification products is seen in Figure 2. 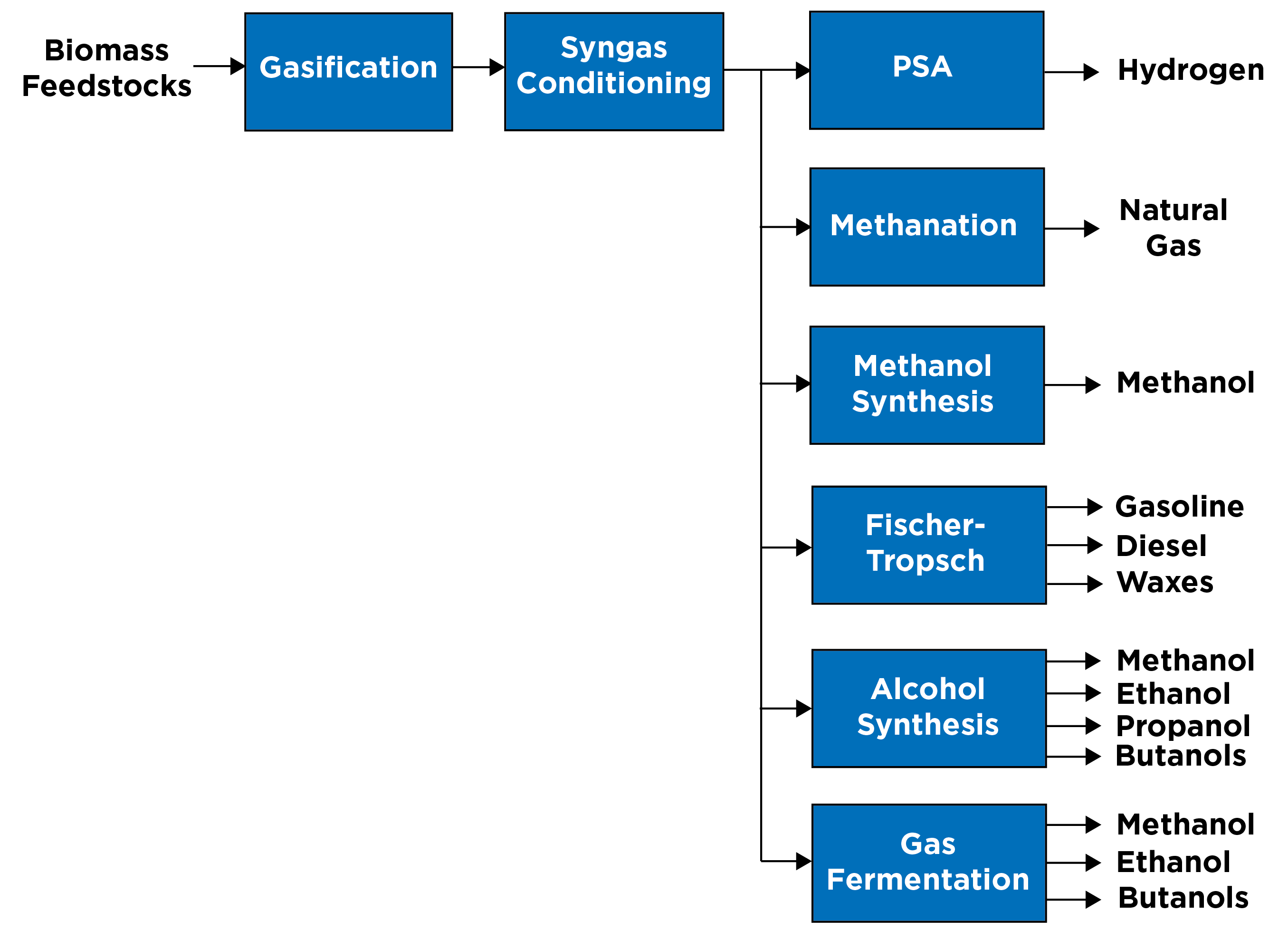 The gasification pathway leverages an established technology that can be adapted to produce a flexible variety of renewable transportation fuels, renewable natural gas and renewable specialty chemicals from sustainable nonfood-based biomass and MSW feedstocks. And while supply of FOGs might be limited, the gasification feedstock — MSW and biomass — are abundant, especially in the U.S.

By turning to gasification, producers can take advantage of the feedstock surplus while reducing the overall carbon intensity life cycle. Indirect land use change (ILUC) carbon intensity values do not apply to MSW and wood waste, opening up market incentive opportunities. As the gasification pathway is more expensive than hydrotreating, these incentives from state and national governments, such as the California Air Resources Board (CARB) Low Carbon Fuel Standard, the Canada Clean Fuel Standard and the Europe Biomass Mandate, can significantly increase the economic viability of this lower carbon intensity solution.

The availability of numerous sustainable solutions within the oil, gas and chemical industry can be overwhelming. Learn how to navigate uncharted territory while generating a profitable, lasting portfolio.