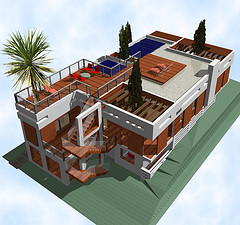 When you imagine homes of the future, do you imagine edible walls, moveable rooms and solar walkways that heat your entire home? These were among the high-tech features on display at this year’s Solar Decathlon, a biennial competition sponsored by the U.S. Department of Energy (DOE) that challenges students around the world to design and build a solar-powered home that is affordable, attractive and energy-efficient.

The primary goal? Design a house with net-zero energy use. Not an easy feat, but not impossible either.

Each team spends almost two years designing their home to prove that solar-powered homes are not only energy-efficient, but also comfortable, affordable and realistic. The winning team is the one that best blends affordability, consumer appeal and design excellence with optimal energy production and maximum efficiency. The DOE provides each team with $100,000 in seed money, but it’s up to the teams to raise funds to make up the difference.

Just like an athletic decathlon, the Solar Decathlon consists of 10 contests designed to gauge the houses’ functionality, livability and aesthetic appeal. A maximum of 10 points is available in categories like architecture, market appeal, engineering, home entertainment and energy balance.

Among the 19 entrants this year was Missouri University of Science & Technology — the only team to be accepted in five of the six competitions since the Solar Decathlon debuted in 2002. The team’s 2013 entry — the Chameleon House — is built around a central, web-based home automation system that adapts to its environment and the needs of its occupants.

As part of my senior design project at Missouri S&T, I helped design a photovoltaic (PV) system for the team’s house. It was truly an exciting and eye-opening experience for me. It allowed me to see a project evolve from the initial design concept to a fully working electrical generation system on a house. Looking back, the Solar House Team was organized similar to a consulting firm; each sub-team is responsible for a portion of the larger project and must coordinate with others for consistency in the design and building phases. It reinforced the importance of teamwork and being able to communicate with fellow team members.

Although the Chameleon House didn’t take home the grand prize — that went to Team Austria and its LISI (Living Inspired by Sustainable Innovation) house — it will continue to provide long-lasting educational value. The Chameleon House will travel back to Missouri and join the school’s past competition houses at Missouri S&T’s own Solar Village, which serves as student housing and university research facilities.

If you were lucky enough to be in Irvine and visit the Solar Decathlon homes, I’d love to know what you thought! And if you didn’t make it, be sure to check out this gallery of all the amazing designs from this year’s competition.

Zach Kirby is an electrical engineer in Burns & McDonnell’s Transmission & Distribution Group, working on protection and controls within the substation department. He recently graduated from Missouri University of Science & Technology in Rolla and was a member of the Solar House Team during his senior year.